The Music Beat: Velasquez is one of Tejano’s chief architects 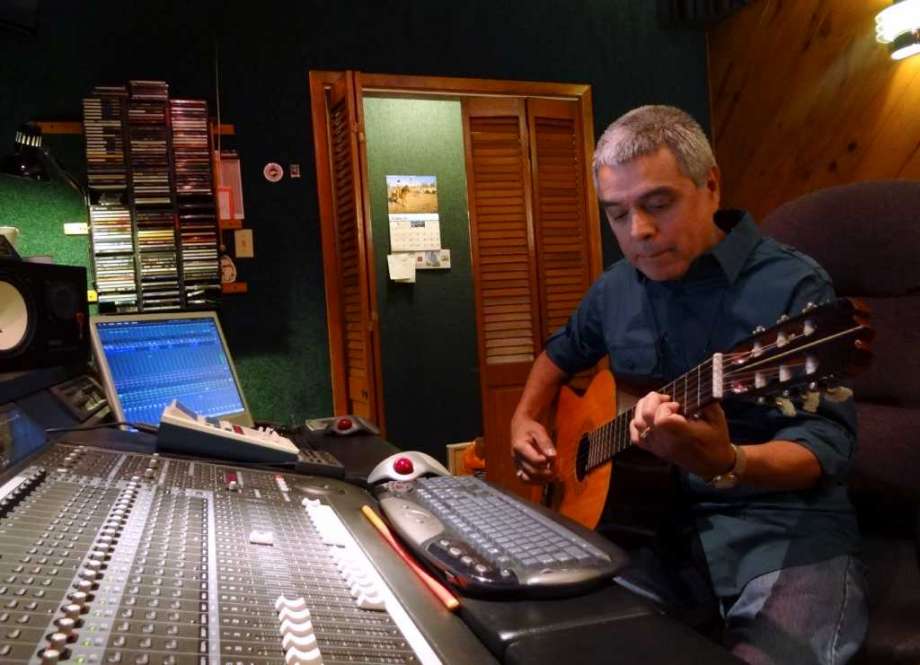 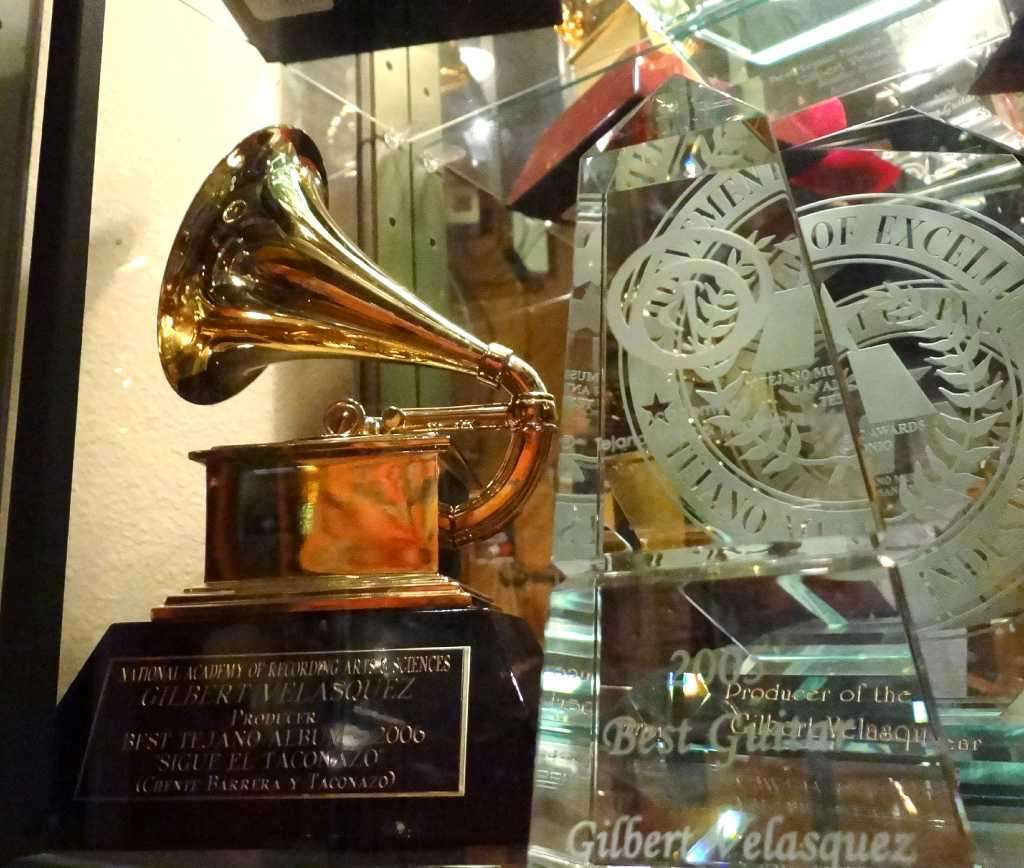 In many ways, Grammy-winning record producer and engineer Gilbert Velasquez is still the little boy playing guitar with the choir in the balcony of Basilica of the National Shrine of the Little Flower.

Not that long ago, he returned to the same loft after a church service and reminisced about those days.

“I’d love to play with them, but they won’t have me,” joked Velasquez, 55. He settles for “blessing my ears with holy water.”

And those are some blessed golden ears. Velasquez has received five Grammys and four Latin Grammys.

The Thomas Jefferson High School graduate, who began his music career playing guitar in the ’70s with the Latin Breed, the Royal Jesters and Sugarjammer, is one of Tejano music’s chief architects, matching Gino Vannelli-influenced ’70s arrangements and production with conjunto, Tex-Mex, Tejano and Chicano rock.

He was there at the beginning, working at Manny Guerra‘s Amen Studio and at Joey Lopez‘s ZAZ Studios, with Mazz, La Mafia, a pre-teen Selena Quintanilla and many others in the early ’80s.

Like many musicians his age, Velasquez counts the Beatles as a huge influence.

VELASQUEZ ON MUSIC
Q: What’s a must for a band entering a recording studio?
A: I would ask them to be well-prepared, well-rehearsed. Beg them to play in tune and be on time. Now, with computer-based technology, a lot of musicians tend to get lazy because you can fix it. It wasn’t like that in days gone past. You had to lay it down right.”
Q: What’s the key to a hit record?
A: Give me a performance.
Q: When do you know a session is going badly?
A: When someone’s full attention is not there. If they’re sitting there recording, and they’re doing other things, they’re looking at Facebook, when they show up drinking. I guarantee the Rolling Stones are not on their ass when they’re recording.
Q: What’s the Gilbert Velasquez sound?
A: The production values, the clarity in the recording. It’s a gift to get that sound. The lion’s share of what I do is all live players. You can’t top that.
Q: Is there a San Antonio sound?
A: Oh, most definitely, man. It’s R&B, kind of Chicano thing here from the West Side, Royal Jesters. It’s in the water here, I don’t know what it is. But San Antonio is huge musically, musician-wise. Austin gets all the props, but there’s a lot here. People come from all over to record here.
Q: What’s the craziest session you’ve done?
A: (Hey Baby) Kep Pa So I recorded that the first time there at ZAZ. I thought it sounded like crap. It was too corn-bally. Ask Augie (Meyers). I said, “Hey, dude. Don’t even put my name on it.” They still gave me credit anyway. He knew what he was doing. I didn’t see that side of it. That’s Augie. Everybody knows it.
Q: Is there a favorite memory?
A: “I remember when Selena would come in. A beautiful woman, but she’d come in with no makeup and her hair in ponytails. Or she’d sit in the back of the room playing with her feet. Man, this is the same chick? At Amen Studio, they’d come over there in a station wagon and U-Haul trailer.
Q: What does it take to be a great producer?
A: Passion and patience.

“How would the world be if there were no Beatles?” he asked. “Music was going like this (indicates with his hands), and those guys came along and just changed it. I’m getting goose bumps. When I was kid, we’d get the broom and play the Beatles. We’d open the garage door, and we had the guy with the cardboard drums, and the other guy had a stick, and we would play like we were onstage.”

Velasquez acknowledges he was green when he started engineering and producing. He credits his wife of 32 years, Debra, for believing in him.

At Amen Studio, Guerra (the Sunglows’ drummer, who produced Talk to Me) let the young man put his production ideas on records by a growing wave that would become Tejano biggest stars, many of them promoted by Bob Grever’s Cara Records.

“Grever singlehandedly put the jumper cables on Tejano,” Velasquez said. “Gino Vannelli was an eye-opener for me. Why? Because the records sounded bad ass. At Manny’s I would experiment.”

Synth strings characterized the sound, replacing horns and accordions. Velasquez says the gasoline shortages of the ’70s and the advent of new keyboard technology played a role.

“You couldn’t have 12, 14 guys on the road anymore,” he said. “That all got condensed when the ARP synthesizer came out.”

At Velasquez Music, in a warehouse on Interstate 35, Velasquez hums and sings arrangement ideas into a boom box, accompanying himself on Spanish guitar. On a legal pad, he jots chord changes, time signatures and accents.

“I love it. I can do this watching Seinfeld or Family Guy,” he said.

The producer and engineer, who draws on Santana, Larry Carlton, Lee Ritenour, Wes Montgomery and Chet Atkins, handles guitar on most sessions.

When he listens to songs, Velasquez is listening for melody and lyrics.

“Maybe most important is the lyrics,” he said. “If it’s good lyrics, we can always fix the melody.”

The Studio of Hits 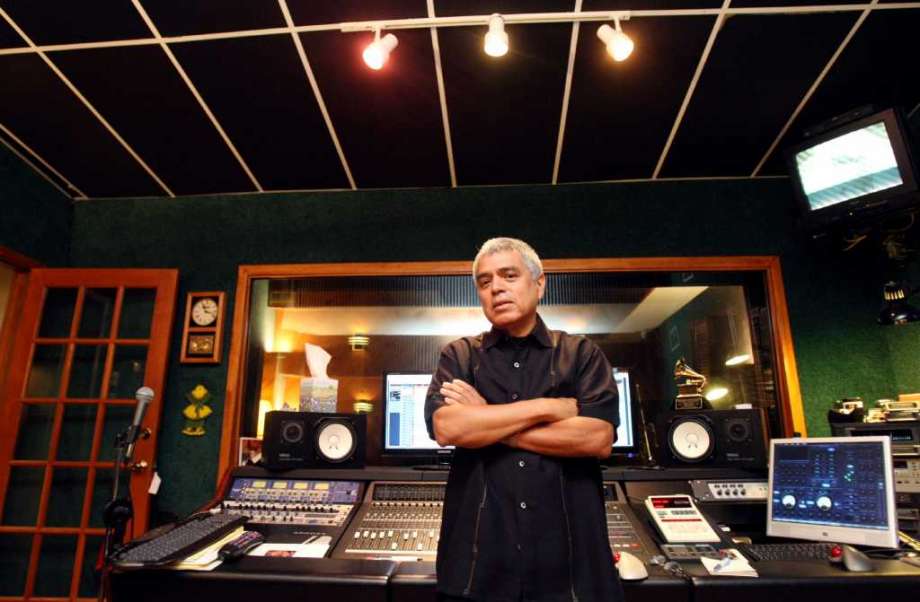 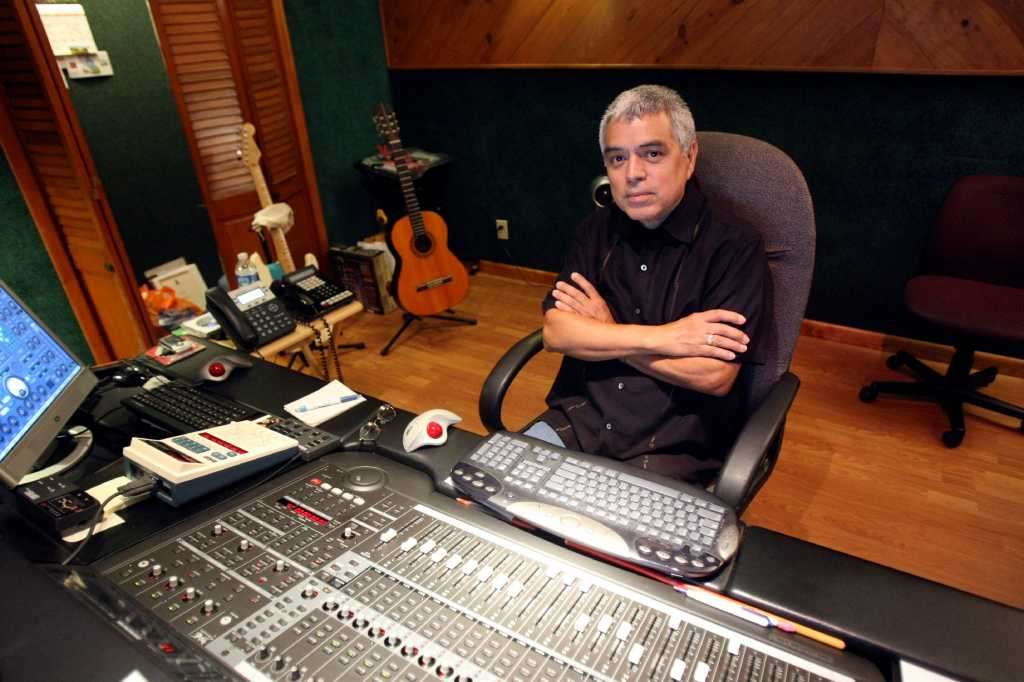 CONEXION: Gilbert Velasquez’s music production company has produced everyone from Selena and AB Quintanilla to up-and-coming artists such as AJ Castillo, winning him seven Grammies in the process. HELEN L.

Tucked away in a row of faded pink warehouse storage rooms just off I-35 near the Fort Sam Houston exit, a music legend works tirelessly, producing hits for artists all over the country.

“They say if you love what you do for a living, you never work a day in your life. That’s me,” says Gilbert Velasquez, the owner of Velasquez Music recording studio. His business fills out two storage spaces, and the only sign of the state-of-the-art recording studio hidden inside is a small business card next to the studio’s buzzer that reads “Velasquez Music.”

Velasquez begins to say that it’s easier for him to name who he hasn’t worked with in the Tejano business than who he has, then stops because he can’t think of anyone big who he hasn’t produced at one time or another.

Selena, Mazz, La Mafia, Ram Herrera, Augie Meyers, Flaco Jimenez, Freddie Fender and Little Joe y La Familia, whose album he won his latest Grammy for in 2010, have all entrusted his ear to their records.

I still consider myself, I am just a guitar player,” says Velasquez, who began his career in music touring with Chicano bands in the ’70s such as the Royal Jesters, and later Jay Perez. Yet after more than 30 years in the business, he has to admit, “I know what I’m doing.”

Perhaps his fondest memory is of recording a live album for the Mexican ranchera band Límite in Mexico City. Seventy-two thousand fans filled the Foro Sol — an outdoor arena used for the Olympics — and Velasquez walked out onto stage alone before the band started, stage lights out, and just took it all in. “I was thinking, look at all these people here. They brought this little chicanito guy from the West Side of San Antonio all the way here,” he remembers.

He wasn’t always sure he wanted to be known for Tejano and Conjunto, though.

It was always playing on the radio at his grandmother’s house, but Velasquez started learning guitar to emulate rockers such as the Beatles back when he attended seventh grade at the school in The Basilica of the National Shrine of the Little Flower. He began playing Tejano in quinceañeras to make money. After that, he was touring with different bands around the country and fell into sound recording when a studio owner asked him to take it over because he was busy.

From there, his career took off.

“I was young, and I had an ear,” he says. “The younger bands kind of assimilated with that, perhaps, and that made me more of a commodity.” He is also a perfectionist who wants to make sure he gets the sound right.

Velasquez still champions the growth of Tejano and its young artists such as the group La Fuerza and accordionist A.J. Castillo, who mixes hip hop and R&B sounds with traditional Tejano and Cumbias, but is stymied by a resistance to new music from the radio stations.

“Young groups are recording, but their music gets played largely on online radio stations. That’s not the same,” says Velasquez, frustrated by what he sees as a lack of vision by local stations.

“The public is hungry for something new.” 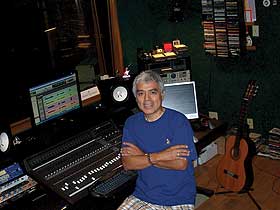 San Antonio–based producer/engineer Gilbert Velasquez , a member of the Recording Academy’s Texas Chapter Board of Governors, reached a few personal milestones in 2010. He is looking back on 40 years as a working musician; 30 years in music production; and 15 years as the owner and operator of Velasquez Productions, which encompasses V-Music, a full-service turnkey production house, his live-recording services and Velasquez Music Publishing.

His recording career began simply enough in 1980: “I was a studio musician, and the owner [of Amen Recording Studios] says, ‘Hey man, I’m really swamped; do you think you can do this,’ pointing at the console. And I said, ‘Sure.’ So I became very familiar with analog recording techniques, along with Mix magazine, and I went to the library and educated myself on the physics of sound.”

During his career, Velasquez has been at the forefront of Tejano or Tex-Mex music, working with artists such as Selena y Los Dinos, Little Joe, Jay Perez, Latin Breed and Mazz, and winning a combined total of eight Grammy and Latin Grammy Awards in the Best Tejano/Mexican American categories. He has also garnered dozens of local accolades. “I’m very blessed, and I’ve always felt that the work that we do here has a certain quality to it,” he says. “When I got that first [Grammy Award], I said, ‘Hey, somebody out there notices what we’re doing.’”

Velasquez travels nationally and internationally to produce artists in multiple genres of music, but makes his home in the comfortable surroundings of V-Music, which he built inside a converted warehouse near downtown San Antonio and operates with a staff of three. “I spend a good 10 to 12 hours a day here,” he says. “In this part of the country, I’m very well known and because of that my door is open and I keep busy. Selling studio time is a small percentage of what I do. Mainly, I do turnkey production work. I created this environment for myself, and I have no complaints. My mixes translate well so something’s right here.”

V-Music comprises a 30×20-foot tracking room, a pre-production suite, a break room and a 20×15-foot control room housing a Windows-based Pro Tools system and Mackie D8B digital mixer. Velasquez notes that he often records to an Alesis HD24 hard disk recorder. “I use Pro Tools more for editing. I have yet to totally move into Cubase, but I’m going that way eventually. It works real well with the rest of the Steinberg stuff that I work with.”

While Velasquez works primarily in the digital domain, and says that the advent of DAW systems enabled him to invest in his own facility, he embraces an old-school production philosophy that promotes the art of capturing live performances with minimal editing and processing. “The art and science of recording is getting lost with all these programs that you can buy,” he says. “Every kid with a laptop under his bed is calling himself a recording engineer. Pro Tools is a dangerous program because you can line up every nuance of a recording to where you’re taking away the heart and soul of a performance. It sounds too perfect. Music breathes, and it moves. We’re not lining up audio files here.”